Competition for the development of 32 houses in Carrer Saragossa in Badia del Vallès. Barcelona.

Pensilis in Latin means "hung", a term that refers to the hanging gardens of Seminaris, in Babylon. And Seminaris, a former Assyrian queen, was the name given by architect George Candilis to his suspended terrace apartment building built in Casablanca back in the 1950s. Courtyards in the air is an idea that we recover in times of global pandemic, as an antidote to confinement, and in times of climate emergency, as a passive bioclimatic strategy.

Adaptation of the proposal to the present context

The building, following the recommendations of the Specific Modification of the PGM of the plot to contest, is arranged in the north end of this plot in order to receive the maximum amount of sunlight.

General planning of the building

Building of 30 apartments with access by alternate corridor. This system of passing aggregation creates a set of wide terraces at double height that a large part of the housing enjoys. Only the common areas linked to the adjacent green areas are located on the first floor.

The economy comes from the geometric and constructive simplicity. Our project is a modular exercise, with a high proportion of medians between homes and their consequent low proportion of facade, and wet cores grouped together. This is how it will be built with the 950 euros/m2 module.

All the apartments are connected to both facades. All the houses have a great terrace opened to the sky. 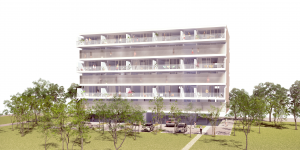 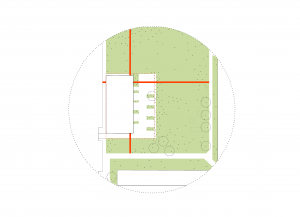 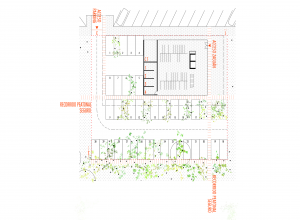 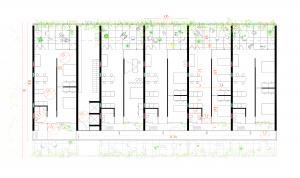 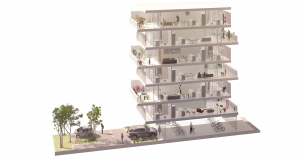 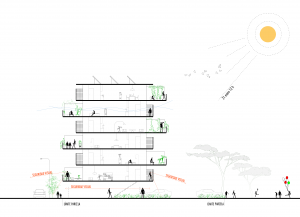