“For centuries my race lived in historical silence, in the depths of life, speaking its ancient language, its Basque; He lived in its mountains of oaks, beech, elm, ash and walnut, covered with fern, argoma and heather, hearing the ocean roar against them, and seeing the sun smile after the stubborn and slow rain, between shreds of clouds. The green mountains and the rough Cantabrian Sea are what have made us."  Miguel de Unamuno, January 1904.

Against the "wall effect"

Offering the city additional urban space, in a dense and compact city like Bilbao, is a project obligation of the architect and an indicator of good administration practices. Our building rises to look out over the Ría del Nervión, an authentic natural and structural axis of the city since its foundation. Upon rising, the building becomes transparent to the pedestrian and the "wall effect" disappears from Morgan Street and beyond. And when we get up we offer a new children's square, sheltered from the rainy days of Bilbao, at the eastern end, next to the future social facilities, while the linear park that comes from the west goes under the building. For this reason, our project is urban architecture; it is a building that understands the place and also enriches it. We want to bring transparency and public space to the future urban renewal of Zorrotzaurre, an original project by Zaha Hadid that makes the north-south transparency of the new urban fabric its main argument.

The building always faces the estuary; each and every one of its spaces, whether public or domestic, contemplate the estuary and the city that extends to its two banks. Its facade to the estuary is an open and wide space of terraces overlooking the deep valley of water that flows and crosses the city of Bilbao, to the sea. The protection mechanism against the rain and the sun are the terraces themselves, which, complemented with the textile protection for the setting sun, build a lively and smooth skin, like an umbrella that protects us from the sun that smiles after a slow rain ...

Its north façade includes the access circulations and the service spaces of the houses. It is a fluid and almost continuous façade that resolves the domestic intimacy with the depth of the corridors and the curved wall thresholds in the access.

Three buildings in one. To avoid the "wall effect" the building is fragmented into three connected parts that grow in height to the north. The lowest part, on one floor, contains the apartments (10 units), and rises from the ground to connect Morgan Street with the future adjoining facilities and the promenade next to the estuary. The middle part, with two floors, is a horizontal volume over which the buildings on Morgan Street loom unimpeded, and contains two-bedroom homes (24 units). The highest part, in the shape of a six-storey landmark, finishes off the plot to the north with two-bedroom houses (24 units). In total, 58 homes are proposed. Each part has its access or hallway. And each vertical communication is a space that sees the landscape, and directs the perspectives towards the center of the city.

The proposed endowment accommodation is internship and flexible. Intern. The natural ventilation of the accommodations is based on the double orientation of their spaces. These spaces are oriented following the prevailing winds of the valley to enhance the Venturi Effect. This is the best passive strategy to substantially improve comfort on hot days. Flexible. The house is made up of two spaces. One common to all and another flexible one that can always be different and adaptable to the user's profile. The apartments is a single flexible space.

The construction of the building is modular and simple. A modular project where elements and geometries are repeated is a guarantee of coherence and economy in the construction process. A carpentry, a partition, a door, a kitchen, a floor, a bathroom ... a type of accommodation. Few equal elements to build the whole.

The energy rating A is achieved by resorting to passive elements such as a studied and efficient envelope made up of carpentry with low thermal transmittance protected by deep overhangs and awnings that control solar protection.

And to complete the eco-efficiency of the building, which is added to the perfect passive operation, active elements such as the DHW system and air conditioning using aerothermal energy are proposed, replacing the solar panel, which according to the European Directive 2008/0016 declares aerothermal energy. (heat extracted from outside air), as renewable energy. 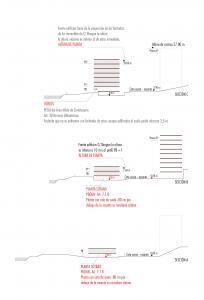 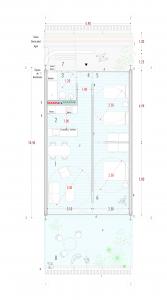