1st Prize for SSS in the contest “Manzana Verde” of Malaga to which the block BL 1.5 is granted.

The Jury has valued the solution of the project section as well as its modulation and its sincere reflection to the outside, considering very correct the typology of raised housing directed to young people that, despite its arrangement in three levels, offers a great versatility and capacity for transformation and adaptation to different and changing needs. The building could achieve high energy efficiency standards due to the layout of its homes and the southern orientation of the main façade.

Schematic of the situation of corridors and vertical communication core

“S” is a letter of the alphabet.

The letters A, B, C, D, E, F, K,... were occupied by the typologization section of STROIKOM (Committee for State Construction) in 1929. Cells C, D, E, F and K, Were associated with corridors, and therefore to community spaces, commune houses, or transitional houses.

The “S” is also the letter of Scharoum who built -1929 Breslau-, a magnificent building that grouped small cells in semi-levels for single workers or couples without children, with a system of access by corridor, and a generous community space.

The “S” is not the letter of BaKema, which much later – 1959 – solved an incredible section of five semi-level served by a single corridor. Bakema was left in the way the communal spaces and for that reason its name does not have S.

The belief that cells, grouped around a corridor would be able to solve all the blocks of the green apple has been the engine of our intervention. The belief that a block with corridor would associate the cells and allow the emptying of some of them to configure community spaces and urban windows seemed obvious.

Scheme of aggregation system and plants in detail.

The “S” is formed by three planes at a semi-level of 3 x 12 m. The access plane is placed lateral to the other two planes in an intermediate semi-level, and with a height of plant and a half, it is destined to the main space of the house. The other two planes at 1.5 meters above or below the former house indistinctly bedrooms, play spaces or work.

The “S” is flexible, allowing diverse uses and spatial relationships.

The “S” and “e” are grouped in different ways, so that different family groups live in the same building. Its grouping causes dwellings of very different size: 36, 72, 108,… Multiples of 36.

As for the urban space, paved areas are minimized, with the rest being resolved with mortar sand and trees of green shade.

Returning to the cells…

Exterior view of the façades of the whole.

Both the “S” and the “e” are generous, because when required, they are left empty, to become community spaces, open spaces, or urban windows. 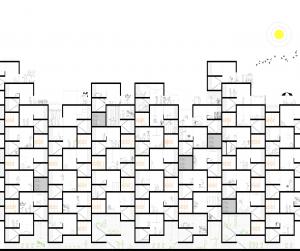 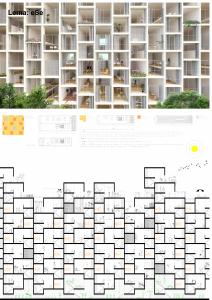 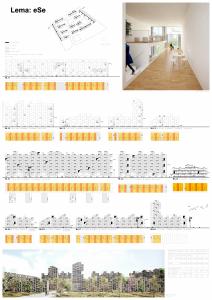 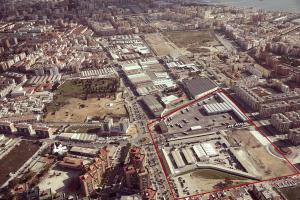