2018. Competition for the Center for care for people with disabilities, Terra, Ourense, Spain.

Terra, earth. Our entire building touches the earth and so do the people who live it. Living touching the earth is a primitive and natural act.

“Galicia occupies an intermediate zone between two ecological and floristic worlds, on the one hand between the Eurosiberian and Mediterranean Nemoral regions, and on the other between the Atlantic province and the Mediterranean province in the Holarctic floral kingdom. This character of limit or passage between two different botanical worlds, make Galicia, from the ecological and sociological point of view, is the country of mixtures. Thus the deciduous oak and the evergreen flourish together. Similarly, the Mediterranean alliance Cistionhdaniferi penetrates between the associations of the Atlantic Ulicionnanae, being very difficult to clearly separate both communities. ”

Mix of space and nature

The park approaches the building from the south. And the building opens and merges with the park, in a sort of mixture between space and nature, like the air when it flows through the wings of a bird. The building is perched on the park and adapts its body to the topography that descends to the west. The building, under a single floor, is coupled to the steep orography and is hidden under the tall and humid oaks and the rugged southern oaks. Both trees are a symbol of two different ecologies, they are front and back, as are the architectural space and nature. Our project is the result of that mix.

The building consists of six wings or pavilions on the ground floor. Three dedicated to rest, one to group activities, another a large dining space and another to kitchen services. On the semi-basement floor, under the dining room wing and opening to the garden are the general services and on the first floor, on the kitchen wing, the office spaces. And on the indoor activities wing, on its deck, we project a space for outdoor sports activities.

All spaces are connected and everything is accessible, not by elevators, but by gentle ramps and bright corridors. The movement in our building is not vertical, but horizontal. Therefore, there is not only total real accessibility, but the movement through our building is a walk between trees and views of the sky.

The building is alive

The projected building is alive, not only because it will be home to a group of 110 people and passing place of those who take care of them, but live in physical terms. Its spaces let the wind circulate through the bottom of a depression dug by the Miño river, east-west direction, as its wings orient in this direction. Between the wings, in the form of soft slopes, the earth captures the rain and the vegetation grows. And the natural light turns on all the spaces of the building and the sun awakens the inhabitants of its rooms in the east. It is a different way of talking about a ZNE (Zero Net Energy) building.

The construction is logical, industrialized and simple. It is logical because the building from its foundation adapts as much as possible to the fall of the land to avoid large clearings and large fillings. Let’s say space is terrified as an economizing strategy. The construction elements are modular and serial from the industry. And therefore their union is simple.

The skeleton of the building is formed by metal frames in parallel to facades and unidirectional slabs of alveolar slab with maximum lights of 11 meters and overhangs, as a stepped trays on a greenery bottom. 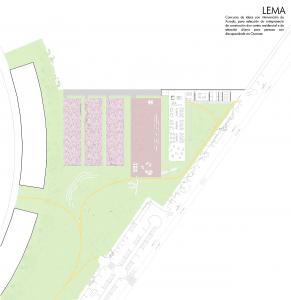 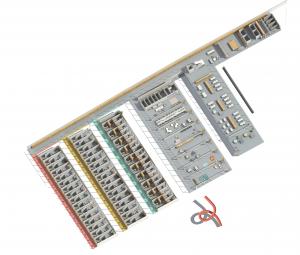