"If you are convinced, as I am, that the ecology and the approach it provides us with obtain surprising results, it becomes essential to increase our knowledge in such an enlightening field of knowledge".

The new linear park we are planning is a place that looks at the horizon. The linear space rises slightly to the west, with a gentle slope sufficient to look out over the factories and see the sunset over the Scania Forest. Thus, our main urban strategy is to "peek" at the city on the western horizon, beyond the Cerro de la Oliva where the Manzanares River flows.

Rivas Vaciamadrid is located right in the middle of two landscapes. To the west, the Scania Forest, a site in the process of regeneration and resilverization that in the future will be connected to the city, when the initiative to build a footbridge for pedestrians and non-motorized vehicles becomes a reality. And to the east, Parque Regional del Sureste, a huge green lung for the metropolitan area of Madrid.

Our reading of the territory is wide. The new 2.5 km long linear space that we propose will connect the two metro stations in Rivas, but it will also be the intermediate natural space that will finally unite the two great landscapes beyond the city. The fusion between the city and its natural periphery is consolidated, and one Sunday morning, in a matter of an hour, it will be possible to walk from one to the other landscape, without the pleasant walk under nature being interrupted.

The mobility lines in the Horizon project are the generators of the urban space. In fact, the main line of pedestrian and bicycle mobility runs along the crest of the slope, marking the border of the city with industry and the highway.

The line goes up and down adapting to the longitudinal topography of the territory, and connects to the existing network to give continuity to the already consolidated bicycle network of Rivas. In short, the project is a line of movement that connects the city and its landscape.

A hard infrastructure, the train track, is replaced by a soft infrastructure, a green track. The compact soil will be the basis for the trees and bushes. Soil is a soft, filtering material. Children play and touch the earth. And it filters and drains the rainwater. It attenuates the high temperatures produced by the heat island effect. The earth is moldable and adapts to the different artificial topographies already in existence. And the earth does not age. Our space is made of earth.

Soils are the protagonists of urban spaces. Those that are called intelligent soils are soils that interact positively with their environment, improve the capabilities of a place and increase urban resilience.

The urbanization process usually involves the impermeabilization of the soil, which means, among other things, a serious alteration in the natural hydrological cycle: runoff increases, the generated flows circulate rapidly and water infiltration into the soil is reduced. This increases the risk of urban flooding and, as the water disappears quickly from the urban surface, the "heat island" effect is increased as the surface water, when evaporating, captures energy from the air and the ambient temperature is reduced.

Since the HORIZONTE project is focused on sustainability, the management of rainwater in the study area has been planned to mimic the natural water cycle by using sustainable urban drainage techniques, following the guidelines set out in the Standard for Sewerage Networks (Version 2, 2016) of the Canal de Isabel II.

The design of the drainage in the HORIZONTE project has been carried out by imitating what would take place in the natural environment. From upstream to downstream, the necessary measures have been taken to reduce the volumes of runoff and retain them where they are generated in order to create a healthy micro-habitat for the citizen. In order to work on environmental education, this project proposes to include informative posters explaining how each element of the water cycle works.

As measures related to environmental education and awareness, it is recommended that informative posters be placed in each of the elements used that explain the functionality of each element within the natural water cycle, the processes that take place in it and its ecological benefits.

According to the canons of sustainable urbanism, the bioretention lagoons of the HORIZONTE project have multiple functions apart from the ornamental. Among their most outstanding benefits: they retain the runoff produced in the impermeable areas of the project, as they are vegetated they are a lure for the introduction of biodiversity, with their linear distribution they favour the creation of a green corridor, as they are several and always have a mirror of water they compensate the urban "heat island" effect. To avoid accidents or drowning, the lagoons will have very gentle slopes and their depth will be a maximum of half a meter in the center of each one of them.

Our strategy for the mitigation of the noise coming from the industrial area is made possible with the "correction of the surroundings" by means of a slope as an acoustic barrier and environmental preamble, which together with the Helmholltz resonators and the diffusing vegetation, will bring silence.

Noise in industrial areas covers a wide range of sound frequencies due to the variety of its sound sources: noise from vehicles, mechanical machinery, sirens, etc. When we talk about sound reduction in exteriors, the first thing that comes to mind is acoustic screens, which are highly effective in certain cases, but very ineffective in others.

The area of 2.5 km long and 30 m wide on average is subdivided into specific functional areas. And as a whole it is a hybrid urban corridor. The description of the proposed uses and buildings is as follows, from north to south and in 4 areas limited by the crossroads:

Area 1: The area currently contains several large sports courts. Our proposal is to complement this area with more urban, small-scale, outdoor sports for both adults and children. In addition to a climbing wall and a skatepark, served by a group of cafeterias.

Area 2: It contains a large outdoor playground for children in its first section, followed by an area of social and cultural activities such as outdoor exhibitions, summer cinema, pétanque and mini-golf.

Area 3: In this area there is a profusion of equipment taking advantage of the widening of the plot. These are:

Area 4: Finally, the action approaches the Rivas Futura subway station. The area condenses multiple uses, the most important being a large conical stage that looks at a grandstand formed by the slope. 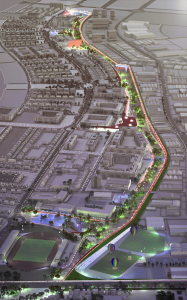