Ideas competition for the definition of strategies for the planning and adaptation of Burriana's urban center, within the scope of the operational program for sustainable growth

Burriana is a compact and walkable city. And taking advantage of this happy condition, the Buris Ana 2030 project intends to build a more lively urban center for the people.

"We are realizing that if people walk, you have a more alive, habitable, attractive, safe, sustainable and healthy city. What are you waiting for?"

General solution for the planning of the different areas to be developed, as well as their integration with the surrounding area and the rest of the city

This new culture of urban mobility requires pedestrian networks that cross the city to connect the center with its periphery and with its natural elements such as the Anna River, the beach or its anthropized municipal district. One such network is proposed in Buris Ana 2030. The proposed pedestrian network expands the current pedestrian network underway from the historic center within the walls to the river and the main central urban facilities: Municipal Market, La Mercé cultural center and buildings of worship.

The pedestrian network links the main facilities in the city center and creates safe and high quality environmental pedestrian routes. The large connected facilities will encourage the exchange of goods and services as well as social relations linked to the walk.

The Carmelitas - La Mercé axis will be the main urban pedestrian corridor of the city. It will run from east to west through the city center, connecting the Onda path with Josep Iturbi square. This corridor, with a wide commercial vocation, will link the new and old squares and the different facilities and stores along its route. But at the same time, this axis with its wide pedestrian area will improve the spatial conditions for the development of numerous ceremonial events typical of the popular culture of our city.

The improvement and expansion of the pedestrian areas inevitably leads to urban policies determined to reduce the presence of private vehicles. The strategy of the Buris Ana 2030 project consists of avoiding the indiscriminate access of the vehicle to the center, proposing a subway dissuasive parking lot in the Ronda Poeta Calzada with a capacity for 300 cars. We reject the parking in Terraza Payá and Pla to avoid the continuous presence of cars in the same urban center, which would go against the proposed strategy.

The vehicle mobility of neighborhood access and loading and unloading is raised by the Main Street enabled with a parking strip of limited time. Eventually, a controlled access service lane is proposed that runs tangentially around the square on the south side. In addition, the change of direction of the Barranquet is proposed so that it works as a circulation loop together with the Carrera Street, and the reduction to only one direction of circulation in the Raval Street.

Urban/economic/social balance of the proposal

With this contemporary spirit based on the value of public space as a generator of urban life, the Buris Ana 2030 project relies on its recovery for the citizens by favouring increased pedestrian traffic. This strategy will bring benefits to the local economy, ecology and social cohesion.

If at present the space of the different squares is literally occupied by the vehicle, in the future, when the public space is renewed, the stores will have ample space to extend outwards. Life on the street will be full, and the local economy will feel the benefit.

Urban ecology is based on designing healthier public spaces. This implies reducing pollution, noise and excessive lighting to the maximum. The project resolutely tackles putting the vehicle in the background. But it also provides solutions that will reduce environmental pollution by means of decontaminating soils (SUD), or will reduce light pollution by using more local and environmental light, or will reuse existing trees as natural rainwater drains.

A wide and divergent space is a good breeding ground for social relations, corridors of people and street conversations. Today's large outdoor parking lot will be transformed into a large space dominated by people, children playing and adults conversing. Social cohesion is based on the quality of public space, which is the space of public life.

Flexibility of the proposal

In a compact city, open spaces must be flexible over time. Different festive activities in the public space take place throughout the year, and the space in the center of Burriana must be free of obstacles so that they can take place. Therefore, a continuous plane is proposed throughout the intervention, without unevenness or staggering, which serves as a "horizontal scene" for the development of outdoor activities throughout the year.

The permeable pavements, due to their capacity to laminate and purify urban runoff, are one of the most complete techniques of the SUDS, which pursue in their most outstanding purposes the closing of the natural water cycle: the infiltration of subway aquifers, the recovery of water for non-drinking uses, or, when this is not possible, the purification of this rainwater before it is dumped into the sewage network.  The porous pavements are proposed around the tree trunks, as drainage slabs that will absorb the rainwater until the capacity of the filtering wells is filled up. In periods of cold drops and large flows, the linear drains around the tanks will function as spillways.

These soils reduce air pollution by means of a decontaminating agent by photocatalysis (titanium dioxide in anatase form). Under the effects of sunlight, it causes a decomposition of the contaminating oxides (NOx) into inert by-products (NO3) that are evacuated by the rainwater. All the tree holes and vehicle traffic lanes will be paved with decontaminating, self-cleaning and biocide slabs.

The recycled rubber tiles and pieces are ecological products, in which approximately 90% of their components are already used rubbers (tires), they are crushed and selected for their later use. The children's play areas planned in the project will use this soft and filtering pavement.

Proposed uses for each zone

The space of the main square, dominated by the Town Hall and the Church of San Salvador, is kept wide and without furniture to receive all the civil and religious acts. The projected space has the dimension it has today, with a quadrangular geometry and tangent to Jaime Chicharro's garden, the Calle Mayor and the Racó de l'Abadía.

Currently there is a large mass of trees of great size in this area, nine trees, which we preserve in its entirety. The bushes and small palms are eliminated to achieve the maximum visuals towards the environment. We want to take advantage of this natural shade area for children's playgrounds and outdoor activities for adults in the interest of balance and social cohesion. The small green lung will function as a transition area between the Plaza del Pla and the Plaza Mayor.

It is a square with a triangular geometry and a slight downward slope towards Calle Barranquet. And in turn, the square is divided into two spaces by a large cedar and a ficus that will be close to turning 70 years located approximately in its center. With these conditions, a double strategy is proposed:

1. To signify the two large trees by surrounding them with a wide ovoid bank close to the ground. It will serve as a great urban seat in the shade and will accentuate the importance of these arboreal monuments in the space of the double square.

2. Join the two spaces with a continuous strip of open-air terraces on the south facade, from Raval Street to La Tanda Street. This will give spatial continuity to the square and also to the commercial pedestrian corridor of La Tanda, managing to form a commercial artery that will go from the Municipal Market to the Plaza de los Carmelitas.

The space of the Payá Terrace is complex. It is a large urban void without a facade, and with several "exits" to the outside. It is currently an outdoor parking lot, and used as a place for occasional events. We understand that recovering this public space for Burriana is fundamental, as it would bring oxygen to the compact factory of the center.

We propose a facade building that surrounds the degraded perimeter of the square. With this operation, the urban image is resolved at the same time and this "new" space is given programmatic content. In point 8 the specific program of each building is developed.

A dissuasive subway parking lot is planned in the Ronda Poeta Calzada with a capacity for 300 cars. This strategy is commonly used in historical centers in our surroundings to preserve public life in the center of our cities by removing the car to its perimeter.

The aim is to project with very few elements, and very few materials, in order to achieve a balanced budget, constructive simplicity and spatial clarity.

The paving of the Buris Ana 2030 project forms a continuous plane and is composed of the intelligent pavements described in section 4 of this report and a continuous polished bituminous pavement for the remaining surface. We chose these asphalt pavements for their high resistance to wear and impact, and for their adaptability to both pedestrian and vehicular surfaces.

Green conservation will be the main green strategy of the project. In addition to this preservation, two large ovoid trees for the cedar and ficus del Pla will be planted with exuberant floral and fragrant vegetation at the foot of both trees.

Two types of street furniture are proposed. Two long continuous concrete benches in the garden and main square that delimit the large rectangular space between the Calle Mayor and the church and Caja Rural buildings. One is situated at the edge of the Calle Mayor to protect from the traffic of vehicles and at the same time form a line of seating for the contemplation of the religious monument and the bell tower. And another is located tangent to the Caja Rural building, where currently and daily neighbors of the neighborhood sit and talk with their own furniture. Two other ovoid concrete benches are proposed to surround the trees of Pla.

Two types of lighting are proposed. One of general character, of great power and reach, formed by several masts of fifteen meters of height, and thought for events and periods of parties and celebrations. Another of an environmental nature, formed by poles of three meters in height, which will illuminate in a focal way main circulations, terrace areas and children's games.

Detailed solution given for each square or urban space

The specific solutions for each urban space have been defined in the different sections. Here is the proposed solution for the Payá Terrace.

A perimeter roof is proposed 4 meters from the ground and tangent to the existing plot.  This "shadow" will act as a second façade at pedestrian level and will "dress" an urban landscape that is currently in a state of high degradation. Under the roof, two restoration spaces are proposed, a social space adjacent to the protected building on Raval Street and two entrance halls to two proposed buildings. The two buildings are supported by the high dividing walls of the existing buildings, and thus the urban facade of the new square is resolved. These buildings contain flexible spaces oriented to training, occupation workshops, spaces oriented to self-employment and entrepreneurship. All of them are social objectives of the EDUSI plan. 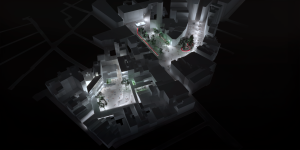 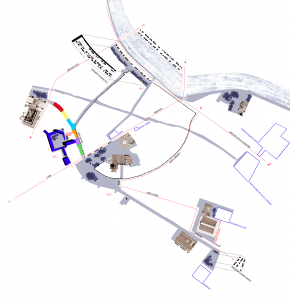 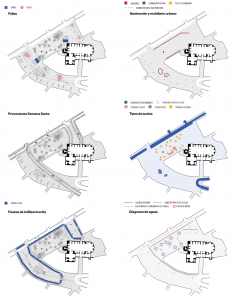 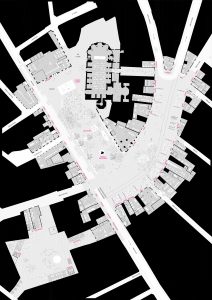