1st Prize to SSS in the contest of ideas called by ALUMED-STRONG for design of SOCIAL HOUSING in an area of TROPICAL AFRICA.

The jury unanimously decided to highlight the proposal presented by SSS “for the response it brings to an urban reality of large African cities. It proposes a very simple typology, by the configuration in parallel bands that brings, through the galleries, a wide spatial, functional and climatic wealth. In turn, it allows versatility through the variation of the building type”.

The Republic of Ghana is one of the most prosperous and stable countries in West Africa. In 2011 it was the country that grew the most in the world after Qatar. This year, its economy grows to 6% and forecasts for 2018 are 6.2% according to the IMF. In the last five years, the country’s population has grown by 2.6 million people, and will continue to grow at a dizzying rate of 3%, the same growth rate as its urban population, which is 50% of the total. For these reasons we look at Ghana, a country where freedom, progress and democracy are breathed, and there is oil. BUT ALSO BECAUSE THERE ARE 2 MILLION INFRASTRUCTURES OR 30% OF THEIR POPULATION LIVES UNDER THE THRESHOLD OF POVERTY, among others.

Migration from the countryside to the city in the Accra Region (The Greater Accra), has been and is being massive. Soon, this mega city will contain 20% of the country’s population: 4 million people. And the destination of the migrated are the extensive settlements of the periphery or informal coastal neighborhoods like James Town or compact neighborhoods in the center of the city like Nima. The Greater Accra is a model of a young African megalopolis that needs new approaches to urban densification and new large-scale social housing policies. This is why we are in the city of Accra.

One of the most populous neighborhoods in Accra is Nima. It is a place of inhabitants migrated from the countryside, of high density, high-density, very low and very compact, where about 30,000 people live in just 1 km2. It is a very vital but poor place and affected by chronic urban degradation. The urban regeneration of this area is our starting point and the ultimate goal of our proposal in this contest.

The urban project we propose requires public investment and private initiative, something similar to the phenomenon of “gentrification” in Anglo-Saxon countries, or the “machizukuri” planning figure in the Far East countries, or “urban acupuncture” in Latin America. All of them are strategies of urban regeneration of consolidated and deteriorated neighborhoods in the big cities, rich and poor, on the one hand based on creating new public spaces to oxygenate and decongest the urban fabric, and on the other, increase the density of buildings in certain well connected areas.

The urban regeneration in the Nima neighborhood consist of two large operations: opening small public spaces connected to one another by expropriating certain areas of the fabric and densifying the edges of the main artery of the neighborhood (Nima Road) providing a large percentage of the land to social housing or rehousing, which is fundamentally the subject of this contest.

The densification at the edges of the commercial corridor Nima Road will build a more urban and profitable city. It is about taking advantage of the natural vitality of this artery that crosses the neighborhood from end to end and multiply its intensity, and in this way create more space and better connected inside the African city.

The architecture of social housing must be modular and flexible. If it is, it will accommodate the masses and build a spatial identity of its own over time. For this we propose a modular skeleton (Stands) based on walls and concrete slabs assembled with aluminum formwork of the STRONG FORM AND / OR ALUMED system, and a set of adaptable light elements (Skins) that will condition the modular space depending on the Orientation of the building, its urban position and the needs of the real estate market. Modular supports and flexible skins are the two elements that build our project.

The tropical climate forces the air currents to cross the spaces to increase the thermal comfort. High temperatures and relative humidity are combated with shaded spaces, lattices and solar protections and cross ventilation. The dwelling in the tropics should be a space between the exterior and the interior, a space in shaded and airy where to spend the torrid and endless tropical summers and covered with the rainfall of the monsoon. 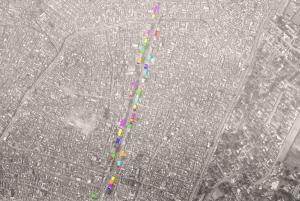